The Friends of the Centennial Trail assists and encourages the development and maintenance of the Spokane River Centennial Trail, adjacent parklands and connecting trails.

Archaeological research reveals the presence of human life along the Spokane River corridor dating back some 11,400 years. The river has served as a vital source of food, transport, power, irrigation, and religious significance to people representing numerous American Indian tribes and generations of western pioneers. In the early 1900’s the Olmsted Brothers, who were among the nation’s leading park and recreation planners, advised the City of Spokane to make the Spokane River the centerpiece of their comprehensive park development plan.  Monuments along the trail provide historical details of the area.

The role of the Spokane River has been chronicled in every historic account of the region because of its significance to those who called the Inland Northwest home. From its bountiful salmon fisheries came food, from its cataracts came power, and from its shores near State Line came infamy at Horse Slaughter Camp.

The 1920's saw the acquisition of virtually all of the river basin from Argonne Road to the Idaho state line by the Inland Empire Paper Company. In the ensuing years, much of what is now Riverside State Park was acquired for preservation by Washington State Parks and Recreation Commission. The riverfront properties inside the Spokane City limits were developed primarily as rail yards and manufacturing. Much of the natural beauty of the downtown river section was either inaccessible or devalued.

EXPO ’74 World’s Fair became the event that transformed downtown Spokane. EXPO restored the riverfront’s openness and public access. The legacy of Riverfront Park became the demonstration of our ability to protect one of our most valuable and eternal resources.

In 1979, Spokane County Parks proposed a bicycle/pedestrian pathway along the river from Argonne Road to the Idaho state line. This idea was nurtured by the Parks and Recreation Committee of the Spokane Valley Chamber of Commerce in 1984 as they explored recreational opportunities along the river. In 1986, they proposed a 10.5 mile trail to be built in conjunction with the Washington Centennial in 1989. Creative thinking quickly expanded this idea into a coordinated effort with our neighbors in Coeur d’Alene, Idaho. The concept was to build a two-state recreational trail from Lake Spokane to the east side of Coeur d’Alene Lake, some 60 miles in length.

Many generous deals were cut to make the Centennial Trail a reality. The Washington State Parks and Recreation Commission recently had declared a significant part of its Spokane County land holdings as surplus for park purposes. This land was received in trade by the Inland Empire Paper Company for their valley riverfront property. Then, of course, there was the matter of how to pay for miles of Trail construction. A $7.5 million federal matching grant was quickly appropriated. Other mutually beneficial arrangements were made, such as AT&T’s laying of fiber-optic cable along portions of the Trail’s desired path. This coordinated approach provided much-needed land preparation for the Centennial Trail. With the cooperation of the entire community, roughly 30 miles of safely separated trail were completed by 1992.

As the trail construction boom reached its end, the steering committee came up with the concept of the “Friends of the Centennial Trail.”  In 1991, Friends of the Centennial Trail became a 501 (c)(3) non-profit Washington corporation, dedicated to the ongoing support of the public sector for the development, operation, maintenance, and enhancement of the Spokane River Centennial Trail.  The organization operates independently and is fund solely through charitable contributions from individuals and sponsors.  The Spokane River Centennial Trail is administered by the Washington State Parks and Recreation Commission, and is maintained through the provisions of a Cooperative Agreement among the commission, City of Spokane, Spokane Valley, Liberty Lake and Spokane County Park and Recreation Departments.  A Coordinating Council comprising members of state, city, and county parks representatives, as well as a member of the Friends of the Centennial Trail, are responsible for implementation of the Cooperative Agreement. 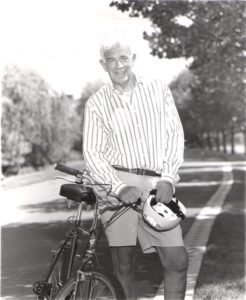 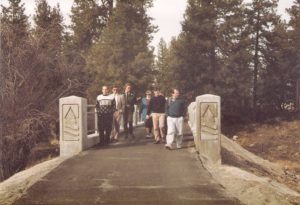